ima not quite over my japanese kick yet. i have wanted to try some yakitori (bamboo-skewered chicken meat cooked over hot coals) for quite some time, but i involuntarily had to wait until the vegas haboob died out, and the winds no longer raged like starving banshees.

my grill died last year so i used our awesome old fire pit, and an old circular grate that did not fit. i didn’t want to bother asking my neighbor if i could use her grill again. she ends up cleaning the grill before and after my use – at her insistence. some days she borrows the family wok, which has to be over three decades old. it’s the same wok i taught her to cook one of her favourite asian noodle dishes in. i regretted not asking until the last ember waned in the night.

i started with the sauce for the yakitori. i tried to keep the lines of japanese tradition alive, but i couldn’t find a bottle of mirin, and i opted-out of using sake too. i poured soy sauce, rice wine vinegar, and sesame seed oil into the pot – tossed in some broken green onions, smashed garlic, and raw organic sugar. fired that up, and it wasn’t long before i was asked, what’s that smell? it smells like how i imagine this show would be. (we’d been watching mark wiens vlog – migrationology, all the hell of the time) it smells good! the sauce tastes similar to teriyaki sauce.

i then sliced up a semi-frozen flatiron skirt steak. threaded and skewered some green onions with it, and then asked my other non-injured nephew to prep and finish the rest so i could ignorantly begin to try and debone or bone the not fully thawed chicken wings like a skilled japanese butcher.

my makeshift grill turned into a rebel. i almost lost the entire meal to the fire and ash. and my thumbs still hurt. but it really was some good stuff, and i was thanked over and over. i didn’t get quite enough good pictures in the end ’cause  i was really hungry. 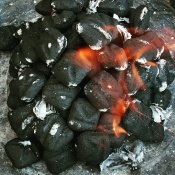 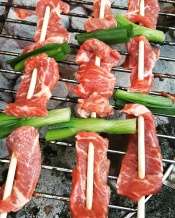 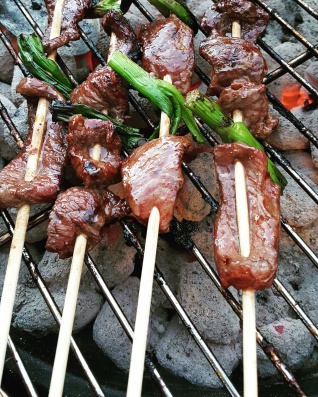 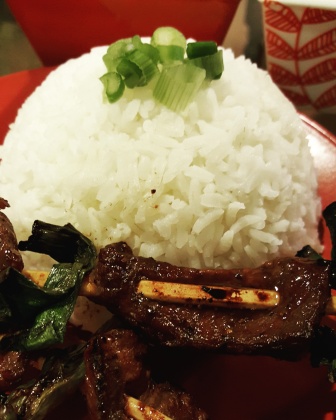 slice in the middle and sever all the meat from the bone. do your best. then skewer. season chicken wings with salt and pepper.

season sliced flatiron steak with salt and pepper. slice to preferred thinness or thickness. skewer. with or without green onions.

two stalks of green onion. find the thickest ones. cut into thirds.

put all the ingredients into a pot and cook over low heat for at least 10 minutes. stir and be sure the sugar is completely dissolved. let it cool. use half of the sauce for the meat, and save the rest as a dipping sauce.

oil the grates. get ’em coals hot and bothered. start grilling! brush the meat and chicken wings with the sauce every so often. do it often! be an avid flipper for this. flip until fully cooked. 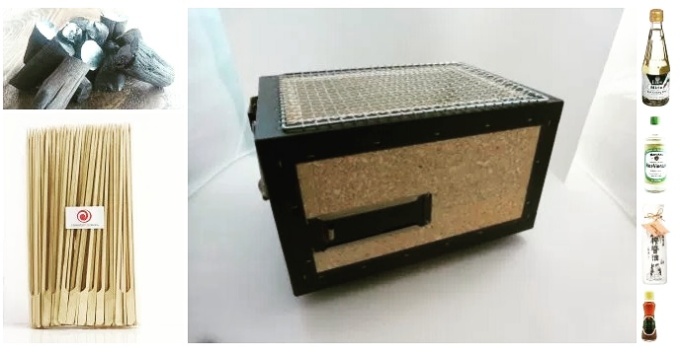 check out some of these yakitori grilling essentials for a japanese style grilling experience.